Lacey Banghard has become the third contestant to be voted off 'Celebrity Big Brother' after receiving the least number of public votes against Claire Richards, Rylan Clark and Heidi Montag and Spencer Pratt. 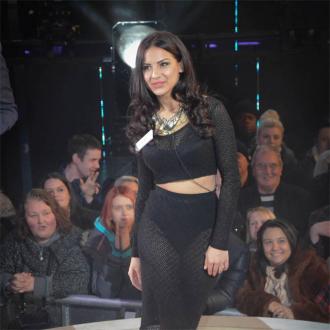 The glamour model received the fewest number of votes from the public after she was put up for eviction on the Channel 5 reality show against Heidi Montag and Spencer Pratt, Claire Richards and Rylan Clark.

Lacey, 20, was greeted by cheers as she left the house - which made her happy after the public booed her entrance.

She told host Brian Dowling: ''Everyone booed me on the way in. I just wanted to change people's perception of me.''

The brunette beauty continued to share her opinion on the massive arguments that began when former 'The Hills' couple Heidi and Spencer re-entered the main house after hiding away in the luxury basement over the weekend.

Recalling her harsh words to them, Lacey added: ''It was horrible. When you think about it they hadn't actually done anything bad to us so I felt bad for saying mean things.

''I tried to get to know them. They really didn't want to be in the house. You start to think you get to know them and then you don't. They have got really big hearts, though.''