Labrinth was left bruised in more ways than one after no one made an effort to catch the rapper as he attempted a stage dive at the University of Kent's summer ball on Saturday night (1st June).

Following Miguel's similar Billboard blunder, Labrinth dived straight into a crowd who didn't catch him. The 'Beneath Your Beautiful' singer took down "50 crowd members" as he ploughed through, plummeting to the ground.

Signed to Simon Cowell's label, the Hackney-born record producer is used to "hitting the deck" at gigs - but not usually this kind.

Just before the bass drop of his hit 'Earthquake', Labrinth (real name - Timothy McKenzie) hurled himself into the unprepared 4000-strong crowd of students, expecting to be held aloft. Instead of rising into a graceful crowdsurf, the daft buffoon was greeted by the cold, hard concrete floor and a bruised ego.

The fans he landed on were knocked over "like dominos", according to student bystander Nasser Naoum, 19, who spoke to Kent Online: "I saw girls looking up from the floor in pain. But I don't think anyone was too badly injured."

The headliner continued his set unphased and uninjured by the superman-soar that went sour. The 24 year-old singer/producer took to Twitter after the event, ribbing himself to nearly 1million followers: "Did anyone se my fantastic stage dive lol" (sic), adding "Seems I've put on a few pounds lately... Haha".

A crushed fan at the 2013 Billboard Music Awards is now suing US singer Miguel for potential brain damage after he leapt on top of her mid-performance, but luckily for Labrinth no one was injured. Security guards quickly moved in to help the shamed star back on to the stage as he continued the song, barely missing a beat.

This could have gone a lot worse - for Labrinth or any of the revellers he hurled himself into - but for now it seems the only thing injured in the incident is his ego. 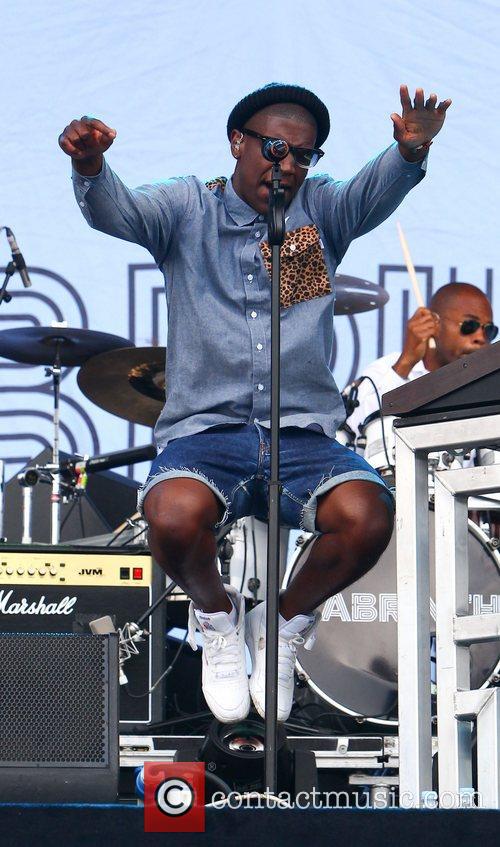 Labrinth At The Iron Man 3 Premiere In London