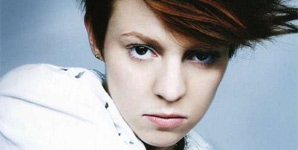 Many of those in attendance at La Roux's appearance in Manchester weren't even sure the band would turn up; not because of any rock 'n' roll unreliability, but rather because they had cancelled their previous night's gig in Bristol due to the illness of lead singer, Elly Jackson. Once on stage, any fear was quashed and there was little or no mention of illness from the lead. The audience, many of whom were unexplainably emblazoned with orange paint, gave the band a rousing reception before a note was even played.

The Warehouse Project is a different sort of gig for most bands to play at; held in what is usually a car park underneath Piccadilly train station; it certainly has an unusual appeal. La Roux was sharing the sold-out night with the likes of Zane Lowe and Autokratz, quite a reward for a band that has only emerged in to the public eye over the past nine months or so.

Style-conscious Jackson enters the stage in her usual clobber; biker jacket, studded top, black gloves and the ever-present medallion. In essence, she couldn't be more 80s if she tried. She does her best to meet the audience's high expectations and for the most part, the band puts on an entertaining show. Blitzing through the better-known tracks, Jackson receives a darling reception for her efforts.

There are a couple of minor glitches to the set and the song 'I'm Not Your Toy' doesn't quite work in the environment. It's summery in its sound and as much as the organisers might try to proclaim the Project can cover all the musical bases, this particular ditty doesn't hit the right note with the audience.

The soon to be re-released 'Quicksand' gets a better reaction and quickly settles the masses. Unsurprisingly, the band's most well-known tracks, 'In For The Kill' and 'Bulletproof' sees more audience participation and encourages Jackson to remain smiley and polite throughout the whole set.

Sadly, one or two niggles remain from the band's sell-out tour. Mainly that La Roux continue to have difficulty in presenting themselves as a collective outfit. It's all too easy to think of Jackson as a solo artist and merely see band partner Ben Langmaid as one of the supporting members. The performance in Manchester did little to dispel this; Jackson was at front holding court on her own from start to finish. But as long as Langmaid is happy with this set-up, it's unlikely to cause the band a problem.

Overall, La Roux settled into the unusual environment well. Their set was well constructed and certainly the whole performance highlighted just how far the act has come since performing at another Manchester institution, The Roadhouse, less than a year ago. However, don't expect La Roux to have opened themselves up to a wide audience with this performance. Rather, their stint at The Warehouse Project should be seen as confirmation that someone out there thinks they have the status to hold their own outside their usual comfort pop bubble. Perhaps La Roux does have crossover appeal; whether or not it will convince The Warehouse Project crowd to descend into the top 40 collection of HMV remains to be seen.