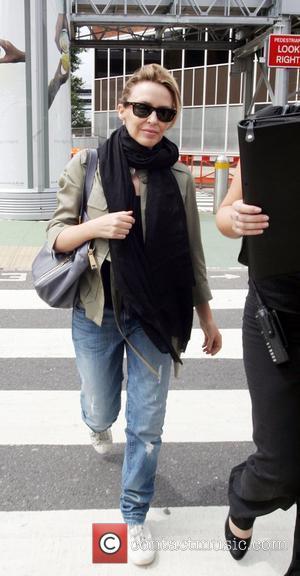 Picture: Kylie Minogue arriving at Heathrow airport where she is boarding a flight London, England - 11.07.09

Kylie Minogue has stepped up her romance with boyfriend ANDRES VELENCOS SEGURA - by reportedly investing in a luxury Spanish property in his home town.
The 41-year-old pop singer has been dating the model, who is ten years her junior, since October (08) and has introduced her beau to family in her native Australia.
And Minogue is so keen to cement her relationship with Segura's parents, who own a bar and restaurant in Tossa de Mar, in north east Spain, she has spent $675,000 (£450,000) on a luxury villa in the coastal town.
A source tells Britain's Daily Star newspaper, "Andres was always meant to take over the business but he has spent so much time on his modelling career he feels guilty about not supporting his dad.
"He's taken some time off to help his sisters get the place running. Buying in Tossa de Mar shows how serious Kylie is about him."