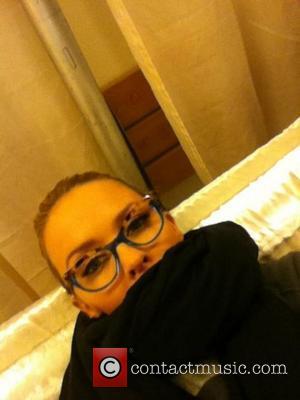 Picture: Kylie Minogue posts this picture of herself on Twitter with the caption, 'My favourite specs...' USA - 01.02.12 Supplied by WENN does not...

Kylie Minogue 'S Slow has topped a chart of 'sexy songs.' To celebrate Valentine's Day, PRS for Music put together a list of the top ten sexy songs that have been used the most in the UK over the last year. Also making the list was Christina Aguilera 'S Dirrty, which came second; You Sexy Thing by Hot Chocolate that reached number three and rounding off the top five was 50 Cent's Candy Shop and Lady Marmalade by Pink, Christina Aguilera, Mya, Lil Kim, which came at numbers four and five respectively.

Kylie's Slow is the most performed song online, on the radio and on TV. The track was released in 2003 and was the lead single from her ninth studio album, Body Language, which received positive reviews. Slow topped the charts worldwide, including the UK; Australia; Denmark and Spain.

Also on the list are Rod Stewart's Do Ya Think I'm Sexy; Madonna's Like A Virgin; Barry White's Can't Get Enough of Your Love Babe; Britney Spears I'm a Slave 4 U and Sexyback by Justin Timberlake. Guy Fletcher, PRS for Music's chairman commented on the list: 'Music can have an aphrodisiac affect upon people especially when they are in a romantic mood and Kylie's Slow seems to press all the right buttons. Personally I prefer the old classics like Hot Chocolate's 'You Sexy Thing' or Barry White's 'Can't Get Enough of Your Love Babe' but whatever your music choice there's certainly something in this PRS for Music chart for everyone.'