Kylie Minogue and long-term partner Andres Velencoso Segura had a huge fight last week after she accused him of not being supportive of her. 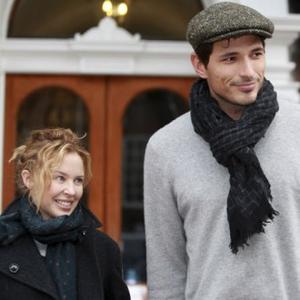 Kylie Minogue's relationship is reportedly on the rocks.

The Australian pop star - whose previous boyfriends include Olivier Martinez, Michael Hutchence and James Gooding - had a furious row with long-term partner Andres Velencoso Segura last week after she accused him of not being supportive during the release of her latest studio album 'Aphrodite'.

A source said: "They had a massive row on Wednesday of last week, at the end of which he told her it was over.

"It seems to be the same old story as has plagued many of Kylie's relationships. She worries that she is not worthy of her lover's affection - especially, as has happened this time and in the past, if she is dating a hot young male model."

Their massive row is said to be the latest in a series of spats the 42-year-old star has had with her 32-year-old Spanish lover.

The source added to the Daily Mail newspaper: "She and Andres had been bickering for a few days. She got quite critical of him, complaining he was not supporting her enough.

"Andres had enough. He told her it was over, that he did not need that kind of stress in his life."

However, Kylie is said to be determined to fight for the romance and while on a promotional tour of Europe, made sure she got in touch with Andres to talk about their problems.

The source said: "She's desperate to patch things up."

Discussing her long-term boyfriend recently, Kylie confessed she was in a "happy" place.

She said: "I'm in a very happy, romantic place and Andres is so level-headed and easygoing. It's enjoyable. He's a good socialiser - which is good for me, because I could easily do my work, which involves so many people, then go home and stay home. I'm so boring."