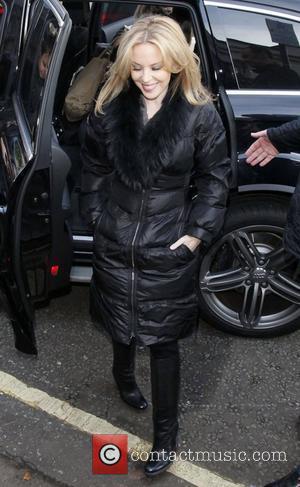 Australian pop-superstar Kylie Minogue has confirmed that she is set to release a newly remixed greatest hits album, containing reworked versions of her some of her biggest hits. Speaking at BBC's Maida Vale studios in London, the 42-year-old said some of the remixed classics would include an orchestra, while other tracks will be stripped down to their bare essentials.
Minogue was in the studio performing a set for BBC Radio 2, and she played songs that included, 'Can't Get You Out Of My Head', 'All The Lovers', and 'In My Arms'. Speaking about plans for the new album, the singer said, "Thanks in no small part to the BBC, I've always loved working with an orchestra and doing acoustic sets, so we're looking to put together an album of the various songs in this kind of manner". Recently, Minogue performed a cover of the Hurts track 'Wonderful Life' as part of Radio 1's Live Lounge sessions.
The singer also confirmed that an acoustic version of 'Can't Get You Out Of My Head', will feature as a B-side on new single 'Better Than Today', which is set to be released on 6th December 2010.