Kylie Minogue praised Boy George for writing ''courageous'' songs as she presented him with the Outstanding Contribution to British Music prize at the The 60th Anniversary Ivor Novello Awards in London today (21.05.15). 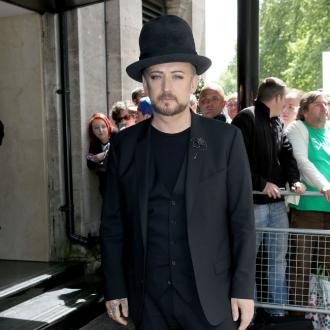 Kylie Minogue praised Boy George for writing ''courageous'' songs as she presented him with the Outstanding Contribution to British Music prize at The 60th Anniversary Ivor Novello Awards.

The 'I Should Be So Lucky' hitmaker honoured the 53-year-old singer and songwriter as he picked up the prestigious accolade during the ceremony held at London's Grosvenor House Hotel today (21.05.15).

The blonde beauty remembered the first time she had seen Boy George perform as she took to the stage and thanked him for inspiring her with his ''incredible pop melodies''.

''I'm really please to get to give this to you, I'm one of many millions of people who you inspired. I never thought I'd end up as part of the British music industry but your music was definitely part of what gave me that dream. Thank you for your incredible pop melodies, your beautiful, truthful and courageous lyrics and for singing with your heart and all of your colours.''

On accepting the award, the 'Karma Chameleon' hitmaker paid tribute to his idol David Bowie adding he was very grateful to both his team and his fans for helping him take home the accolade.

He said: ''Thank you to the Ivors for this awards, I've written some things down because my days of winging it are over. It's also nice to not be up against anyone else, to know you're getting an award and not have to do that disappointed face.

''When I was at school all I did was look out of the window and draw pictures of David Bowie. I left school with A-level Bowie, that's the only thing I achieved at school. I never really got past the 70s, I still live in the 70s. It was the most amazing time. You watched 'Top of the Pops' and you'd see Bowie, Elton John and The Sex Pistols, how music should be ... It's amazing for me that I've had this 30 year career doing something that I love. To spend every day doing something that you love I mean what a f***ing life.

''I want to thank my manager Tony Rodney, he managed me for 30 years. He's been a father figure, a friend, and I put him through hell! I just want to say I love you Tony and your lovely wife Avril. I want to thank Steve Levine, our original producer, I know Steve was pretty instrumental in me getting this award so thanks Steve, I'm glad I kept your phone number. I thank everyone who ever bought a record or a concert ticket. This is amazing I'm very grateful.''

Other winners at the awards' 60th Anniversary ceremony included Ed Sheeran, who picked up the gong for Songwriter of the Year and Albert Hammond, who took home the Outstanding Song Collection prize.

The Ivors Special Anniversary Award went to Bob Geldof and Midge Ure, who co-wrote the Band Aid hit 'Do They Know It's Christmas?' in 1984.

Annie Lennox was honoured with the BASCA Fellowship and Black Sabbath, made up of Geezer Butler, Tony Iommi, Ozzy Osbourne and Bill Ward, were given the Lifetime Achievement Award.

PRS for Music Most Performed Work:

'Rather Be' - by James Napier and Jack Patterson

'The Honourable Woman' - by Natalie Holt and Martin Phipps

'So Long, See You Tomorrow' - by Jack Steadman

'Take Me To Church' by Hozier

'Rather Be' - by James Napier and Jack Patterson