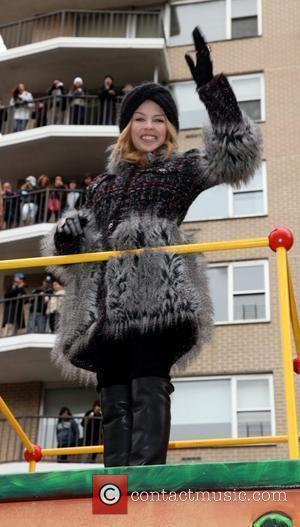 Kylie Minogue, the 42-year-old Australian pop superstar, performed her single 'Get Outta My Way' at the MACy's Thanksgiving Day Parade in New York City yesterday (25th November 2010) . The singer was sporting a heavy winter coat and matching fur hat as she wowed crowds at the traditional parade in Manhattan, reports MSN.
Minogue performed the song atop of one of the parade's 'floats', and other stars to perform at the event included Kanye West, country music sensation Miranda Cosgrove, and Jessica Simpson. However, it was Minogue who stole the show as tens of thousands of onlookers applauded and cheered the pop princess as she promoted her new album 'Aphrodite'. The day's festivities marked the 84th annual MACy's parade, and the crowds were treated to the traditional giant balloons, as well as appearances from the cast of Broadway musicals 'American Idiot', and 'Elf'.
Kylie's new album went straight in at the top of the UK Album Charts, meaning she is now the only female recording artist in UK chart history to have had a number-one in four consecutive decades. Recently, the singer performed tracks from the album on US shows Dancing With The Stars and 'The Tonight Show with Jay Leno'.