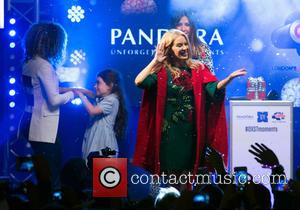 The Australian singer got into the seasonal spirit by donning a green dress with a sparkly red rose design, a red woolen cape, and matching shoes. She giggled and waved excitedly to the crowd as she stepped onto a podium in the city's Oxford Street shopping Mecca to press a big red button, activating the display.

Thousands of onlookers lining the road cheered as they saw the array of tinkling lights and almost 450 golden baubles, which will remain turned on until the New Year (16). The crowd was also treated to performances from Foxes and Gabrielle Aplin.

Taking to Twitter.com after the event, Kylie shared her jubilation with fans, writing, "Thanks to everyone who came out to join in The Oxford Street fun!!!! The lights. Are. ON!!!!"