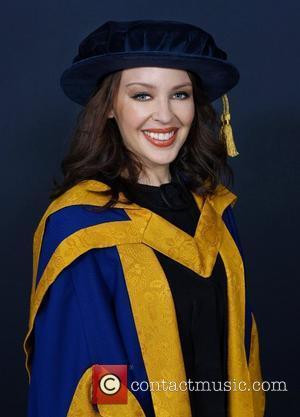 Picture: Kylie Minogue is made 'Doctor Of Health Sciences' at a presentation for the honorary degree at Anglia Ruskin University, Chelmsford Campus Chelmsford, England - 05.10.11...

Pop superstar Kylie Minogue hopes her newly-awarded honorary doctorate will help inspire researchers to keep working on finding a cure for breast cancer.
The Spinning Around singer was awarded a Doctor of Health Sciences degree at Anglia Ruskin University in Chelmsford, England on Wednesday (05Oct11) for her work promoting awareness of the disease.
Minogue is five years in remission from breast cancer after undergoing chemotherapy following her diagnosis in 2005.
The star donned a traditional cap and gown to collect her certificate alongside 224 students at the graduation ceremony, and she's urged cancer researchers working at the university and those suffering from the disease to keep fighting.
She says, "I was incredibly honoured by today's ceremony and it was an inspiration to be amongst the graduates at Anglia Ruskin University. Hopefully my award will help to inspire both the researchers into breast cancer and those affected by it."