The unlikely duo have covered Yazoo's Only You

Three of the most unlikely things have come together to make everyone’s Christmas complete. Firstly, take Pop Princess With the Perfect Bottom, Kylie Minogue. Then add a little British Comedian Gone Across The Pond, James Corden. Finally, sprinkle a bit of 1980s Yazoo and you’ve got a delightful new Christmas cover single. 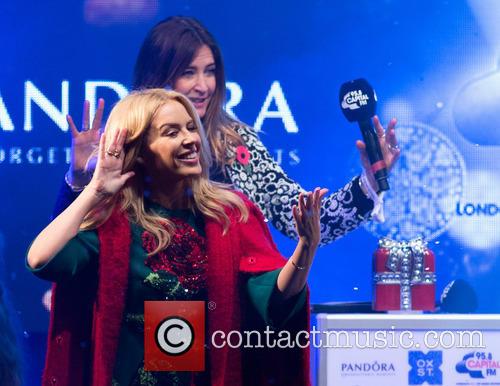 Kylie Minogue has come over all Christmassy

Kylie and Corden have joined forces to provide a Christmassy version of Only You and Mr Corden is not as bad a singer as people may at first think.

Fortunately he’s had a bit of practice singing with celebrity guests on his US show and then there was that musical he was in last year with Meryl Streep – Into the Woods.

And of course Kylie is quite well known for her abilities with a good tune.

The pair cover the ballad, which was originally written by musician Vince Clarke who released it after becoming the Yazoo duet Alison Moyet.

Songstress Kylie has released her single on YouTube as part of a new album of seasonal covers, duets and original songs.

Iggy Pop will make an appearance on the on Christmas Wrapping, originally recorded by The Waitresses in 1981.

Kylie Christmas is out on Friday, November, 13.