It's probably fair to say that the longer an artist is in the music business, the higher expectations become, especially when it comes to live performance. So, recorded over two nights at London's 20,000 capacity O2 Arena, twenty-something years into her career as a solo performing artist, this live recording and DVD shows how exactly how Kylie Minogue still does on this, the Aphrodite Les Folies tour in the wake of the release of her recent album Aphrodite.

The recording kicks off with an ambitious, suspense building opening entitled 'The Birth Of Aphrodite (Intro)' greeted by the cheering twenty-thousand strong adoring London masses, before pounding into the lead and title track 'Aphrodite' during which Minogue essentially personifies herself as Aphrodite; the [Greek] goddess of love, beauty, pleasure and procreation. Announcing lyrically 'I was gone and now I'm back, can you feel me on your stereo?' with great confidence and determination, the opening track of Kylie's show proves that the 43 year old is well and truly back for more with distinctive yet secure vocals. There's a smooth segue into 'The One' which continues the disco pound and energy beneath Kylie's vocals and then there's an almost eighties rock swagger to 'Wow' which follows maintaining the confident glory that one would expect from someone so many years into her career, so too having a cast of many performers alongside her on stage. 'Illusion' grows out of an atmospheric, suspense-creating instrumental passage which gradually gears up to kick into the track. The driving bass line of Kylie's 2004 single 'I Believe In You' then continues to hold the pace and energy meanwhile her vocals remain strong, secure and similarly suffer no falter in energy or flexibility. Ridden with electro synth riffery and even more of a swaggering dance pound, 'Cupid Boy' leads forward into 'Spinning Around', the number one single from 2000, with its' bass groove remaining dominant in the mix throughout to really drive the live performance and also continue a real funky disco flavour throughout. 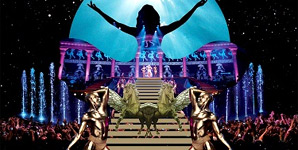 For the opening of 'Everything Is Beautiful' the accompaniment drops back to solo piano which provides welcome variety to the pounding dance groove and similar paced tempo that have geared the majority of the preceding tracks though the track does eventually kicks into more of a slower sultry strut. 'Slow' is then opened by a sexy and sultry sax line and continued in a sultry jazzy swing sound complete with horn backings and walking bass line; again this provides welcome contrast and variety amongst a quantity of energetic pop. During the closing minute and a half, the beat then triggers a change of pace into the more familiar strong disco pop. A two and a half minute, suspense-creating introduction to 'Confide In Me', dominated by a forceful dance pound beneath layers of spacey vocals and synths, sounds the kind of euphoric club vibe to which one would imagine strobe lighting. Into the track itself, one of her greatest hits sounds in all its moody glory, which, in its' soaring chorus melody, perfectly showcases the strength and versatility of Minogue's vocal; this is followed by another of her biggest hits, the 2001 number one single 'Can't Get You Out Of My Head' which struts forward in another eighties rock flavoured blend ridden with chugging distorted guitars complete with the live favourite interception of a drum flanked audience chorus.

'Looking For An Angel' opens disc two, perhaps the logical second part of the concert, with an instrumental build up. The second disc/second part continues with exactly the high standard of the preceding tracks through 'Closer' to 'Love At First Sight' and then into an extended percussion introduction for an energetic performance of 'Better The Devil You Know' which has just the swagger and popularity today as back in the day. Then, snapping right back to the present, Kylie continues with two singles from her most recent album Aphrodite, through a pounding euphoric dance version of 'On A Night Like This', complete with dub step breakdown, before concluding her substantial set with 'All The Lovers'. Performing a superb and varied set spanning all twenty-something years of her career complete with stunning costumes, lighting and dancing, Aphrodite Les Folies shows that even the other side of forty, Kylie is still at the top of her game as a great all round performer.