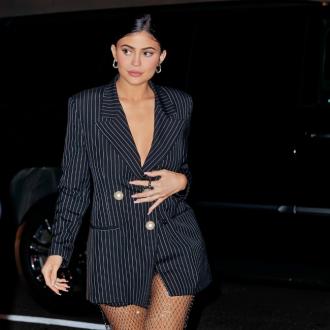 The 'Keeping Up With The Kardashians' star - who has two-year-old Stormi with her ex-boyfriend Travis Scott - would love to add to her brood one day but she admits pregnancy is ''a serious thing'' and very ''hard'' at times, too.

She said: ''I want seven kids down the line, but not right now. Pregnancy is just not a joke, it's a serious thing and it's hard, I'm not ready for that just yet.''

And the 22-year-old reality television personality is desperately trying to entertain her daughter as they are all in self-isolation amidst the coronavirus.

Speaking to her pal Stassie Karanikolaou in her #DoYourPart Instagram Live, she added: ''I have bought her every single outdoor toy you could imagine. She has bouncy houses out there, water toys. he's been in the pool everyday. She's been outside everyday, just living her best life - I'm trying to keep her entertained. She has no idea what's going on, it's amazing.''

Meanwhile, Kylie had previously confessed her life ''changed forever'' when she welcomed Stormi into the world.

Marking the little one's second birthday earlier this year, she wrote: ''And just like that she's two ... happy birthday to my Stormi. February 1st 4:43pm the moment my life changed forever. We were meant for each other stormiloo (sic)''

Kylie also recently opened up about Stormi's birth for the first time.

She said at the time: ''I actually got induced. I thought I was gonna have her on the second, 2-2-18, and she came early. They broke my water and I had her 45 minutes later ... It was crazy and, yeah, I would love to share with you guys. Happy early birthday to my baby. I can't believe she's about to be two.''