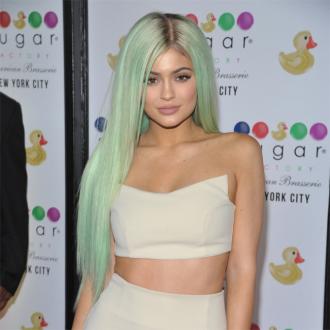 The 'Keeping Up With The Kardashians' star was enjoying a bite to eat with boyfriend Tyga, 25, at Nobu in Malibu when her stepsister and father - who was known as Bruce Jenner before undergoing a gender transition - showed up.

She captioned a photograph of herself and Caitlyn on Instagram: ''How is it that Caitlyn, Kourtney, and I ended up at the same restaurant tonight? Perks of having a huge family. (sic)''

Meanwhile, the 65-year-old former Olympian previously admitted the 18-year-old television personality was having a ''hard time dealing'' with the transition.

She shared: ''Kylie's the one we're really worried about. She's having a hard time dealing with this. I do everything I can to try to stay in touch but she doesn't want to talk about it. She's just shut me out lately.''

And ahead of their first meeting, Kylie admitted she was ''a little uncomfortable'' about their rendezvous.

She said: ''I do want to meet her. It will be a little uncomfortable in the beginning, but I think we are both ready.''