Kylie Jenner is confirmed to be releasing her own lip range called Kylie Lip Kit. The 'Keeping Up with the Kardashians' star teased fans with a picture of one of the new lipsticks. 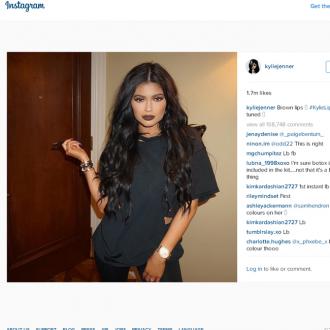 Kylie Jenner is releasing her own lipstick line.

The 'Keeping Up With the Kardashians' star took to social media to post a picture of herself with a brown matte lipstick alongside a caption ''Kylie Lip Kit'', which representatives confirmed to E! News as the name of the new beauty brand, which will be released this Autumn.

The 18-year-old reality TV star and model posted an image of her posing with the product on her Instagram account alongside the caption: ''Brown lips #KylieLipKit stay tuned (sic)''

It's not the first time Kylie has branched out in the beauty world, she is currently an ambassador for Nip + Fab and recently released hair extensions with Bellami.

Earlier in the year Kylie, who is dating US rapper Tyga and is currently celebrating her 18th birthday, crashed the internet with social media phenomenon hashtag Kylie Lip Challenge, where her fans had to place a glass around their mouth resulting in extreme plumper and fuller lips.

Kylie responded to the craze and insisted she is not trying to make girls think they should be like her and she stands by being ''yourself'' and being brave enough to experiment with looks.

More information about Kylie Lip Kit is yet to be announced.