Kylie Jenner reportedly ''can't wait'' to turn 18 on August 10th next year because she wants to be able to date 25-year-old Tyga legally. 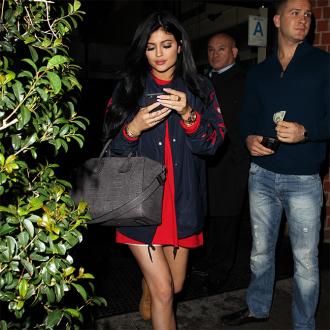 The 'Keeping Up With The Kardashians' star - who reaches the milestone on August 10th next year - wants to be able to legally date her rapper love interest, 25-year-old Tyga.

A source revealed: ''Kylie's clearly in awe of Tyga and loves being treated like his princess, even though they're just friends.

''But she has told her sisters many times, 'I can't wait to be 18. The guys my age are lame and don't know how to treat me like Michael Ray does. He's so fine and a perfect gentleman.

''Kylie doesn't even call him Tyga. He's Michael Ray to her.''

Despite their age difference, the pair were spotted on a cosy dinner outing last Thursday (18.12.14).

Another source revealed to HollywoodLife.com: ''They ordered one serving of pan-seared striped bass and ate off the same plate.

''They even used the same fork! He even wiped her mouth with the napkin several times during dinner. He's just too sweet to her.''

Meanwhile, Kylie is reportedly keen to follow in the footsteps of her rumoured boyfriend and try her hand at rapping.

A source close to the television personality said: ''Kylie wants to be a rapper - she loves Iggy Azalea and thinks she could be on her level, with Tyga's help.

''He actually thinks Kylie has some talent but tells her she needs to polish her lyrics before he'll agree to do a song with her.''