Kylie Jenner and Tyga fuel dating rumours with night out

Kylie Jenner and Tyga have sparked further speculation they are dating after being spotted having a meal together at a Japanese restaurant in Hollywood on Monday night (06.10.14). 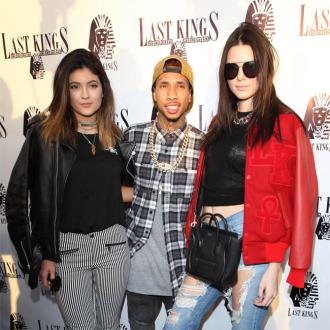 Kylie Jenner and Tyga have fuelled further dating rumours after they enjoyed a meal together on Monday night (06.10.14).

The 25-year-old rapper and the reality star - who was previously thought to be dating Jaden Smith - were spotted at Japanese restaurant Kabuki in Hollywood on what it is said to have been a ''date''.

A source close to the musician told gossip website TMZ that Tyga and Kylie are now ''dating'' but the insider insists their relationship is not physical because the raven-haired star is only 17.

Tyga also fuelled the rumours by taking to his Facebook account earlier today (08.10.14) to post a picture of himself with Kylie clearly visible in the background.

The pair sparked speculation they were a couple last month when they were spotted at Universal Studios' Halloween Horror Nights in California with a group of friends.

However, last month Tyga hit out at speculation he and Kylie are were dating, insisting they are ''just friends''.

He tweeted: 'DONT BELIEVE THE RUMORS, BEEN FRIENDS WITH THE FAMILY FOREVER. WE'RE ALL JUST FRIENDS. (sic)'

Tyga has a two-year-old son King Cairo from his relationship with former fiancée Blac Chyna, who he split from in August after nearly three years of dating.