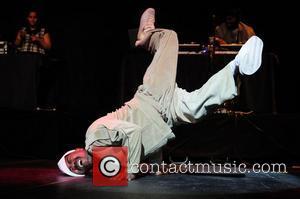 Rap pioneer Kurtis Blow has been fined for drug possession after airport security guards found a stash of marijuana on him during a body scan in Los Angeles.
The hip-hop star, real name Kurtis Combs, was busted after walking through one of the newly-installed full body scanners at the city's LAX Airport.
The machine's computers detected "an anomaly" in his trousers and he was subsequently subjected to a pat down by officers, which led to the drug find.
But The Breaks hitmaker, 51, managed to escape arrest and simply walked away with a ticket because he was carrying less than an ounce of pot, reports TMZ.com.