There are a number of fantastic movies due out in 2016. Contactmusic.com's resident film reviewer, Rich Cline talks us through some of the most anticipated.

As always, there are far too many sequels, spin-offs, remakes and reboots clogging the cinemas, but surely some will be worth the effort. (Release dates are subject to change.)

10. The Hateful Eight
Tarantino kicks off the year with an epic Western starring Samuel L. Jackson and Kurt Russell (Jan). And there's more manly action with Charlie Hunnam in Knights of the Round Table: King Arthur (Jul), Jack Huston in Ben-Hur (Aug), Chris Pratt in The Magnificent Seven (Sep).

9. Hail, Caesar!
George Clooney reteams with the Coen Brothers for a madcap Hollywood comedy (Feb). Other higher-brow offerings include Michael Shannon and Kevin Spacey in Elvis & Nixon (Apr) and Emily Blunt in The Girl on the Train (Oct).

8. Bourne 5
Matt Damon is back for more fast-paced action as the intrepid, forgetful spy (Jul). Also back for some sequel action: Tom Cruise in Jack Reacher 2 (Oct) and Shailene Woodley in Allegiant (Mar).

3. Zoolander No 2
Ben Stiller and Owen Wilson will be back with more supermodel antics (Feb). More comedy sequels: Zac Efron and Seth Rogen return for Bad Neighbours 2 (May), Renee Zellweger has Bridget Jones's Baby (Sep), and Billy Bob Thornton is back in Bad Santa 2 (Nov). 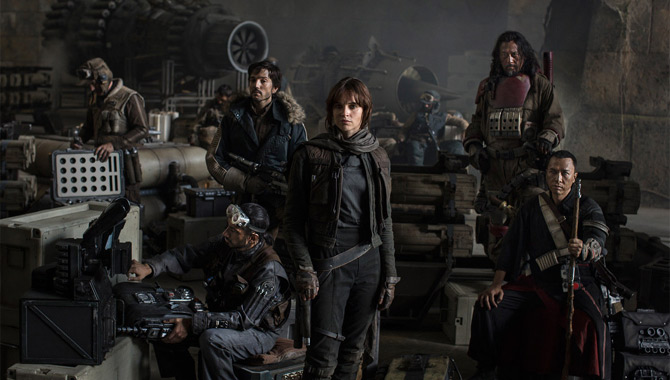 1. Rogue One: A Star Wars Story
The first spin-off adventure in the saga, a contained thriller starring Felicity Jones (Dec). And J.J. Abrams' other revived big sci-fi franchise will be back with Star Trek Beyond (Jul).

And as happens every year, 2016's release schedule is packed with sequels we never asked for, including My Big Fat Greek Wedding 2, The Huntsman: Winter's War, Alice Through the Looking Glass, Now You See Me 2, The Conjuring 2, Ouija 2, Teenage Mutant Ninja Turtles 2 and The Purge 3.