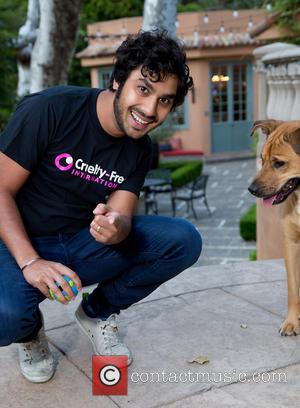 Picture: Kunal Nayyar - Actor, Kunal Nayyar, is the second of the cast from the award winning show to team up with Cruelty Free International to...

Actor Kunal Nayyar is following in the footsteps of his The Big Bang Theory co-star Mayim Bialik by calling for an end to cosmetic testing on animals in America.

The Anglo-Indian star has become the latest celebrity to join the Cruelty Free International campaign, which was set up to encourage U.S. government officials to approve a ban on laboratory experimentation on mice, rats and other creatures in the development of beauty products, including make-up, shampoo and toothpaste.

A statement issued by Nayyar reads: "I am delighted to join the Cruelty Free International campaign to end the use of animals for cosmetics tests around the world.

"I am proud that in England, where I was born, and in India, where I grew up and have lived for many years, animal testing for cosmetics has already been banned. The U.S now has the opportunity to follow suit and I urge everyone to get behind the Humane Cosmetics Act."