Actress Krysta Rodriguez Has Left The Cast And Crew Of The Broadway Revival Of Spring Awakening In Awe By Refusing To Let Her Battle With Breast Cancer Affect Her Stage Schedule. 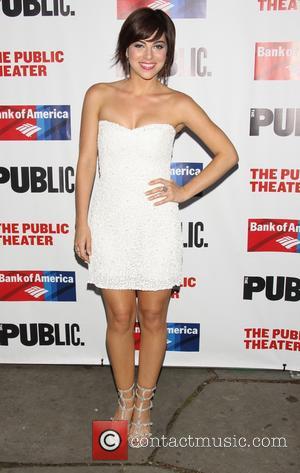 The former Smash star went public with her health crisis in February (15), five months after she received the devastating diagnosis, and after undergoing treatment to remove a tumour, she went straight back to work to prepare for the Deaf West Theatre production's transfer to the Great White Way.

Director and longtime friend Michael Arden admits he is impressed by her dedication, saying, "She is such a hard worker and she has dived head first into this. It's a lesson to us all: Sometimes you can choose to be owned and be ruled by our afflictions. But sometimes we can use it as a tool."

However, the 31 year old confesses she is uncomfortable with being viewed as an inspiration and would rather just get on with her career without the extra attention her ill health has garnered.

She tells The Associated Press, "I'm not doing what anyone else wouldn't do. You get cancer, you try to cure cancer. I don't really know many women my age at least who would be like, 'Oh well, guess it got me'. That's not in our nature, anyway. So I don't really feel like I deserve any sort of accolades for that."

She adds, "What I have learned is that everything is less awful than you think it's going to be. You sort of see this thing and you think, 'This is going to be so terrible'. And you get to it and you get through it.

Rodriguez's career has come full circle with her role as Ilse in the musical revival - she served as an ensemble member in the show's 2006 Broadway run and worked as her character's understudy.

The cast of the new show will also feature 27 deaf and hearing-impaired performers, including actress Marlee Matlin, who will make her Broadway debut when the production opens at the end of September (15).

The rock musical about teenage sexuality will be performed in English and American Sign Language simultaneously.