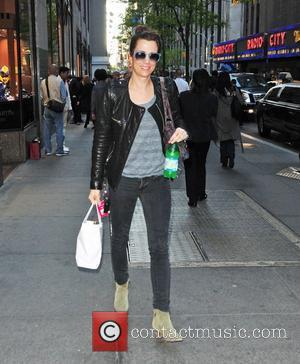 Trying her hardest to hold back the tears all night, Kristen Wiig's SNL days ended as she bid her fondest of farewells to the show she has worked on for the past seven years. During her time on the show she has proved just as popular outside the set of Saturday Nigh Live as on it, appearing in such notable roles in Friends With Kids, Paul, Adventureland and Knocked Up, among other films. She is probably best known outside the show for the Oscar-nominated movie Bridesmaids, which she co-wrote and starred in.

Guest host Mick Jagger played the principal at a high school graduation in the show's final sketch making an example of Wiig, in cap and gown, as "one particular student who is leaving this summer." The show then went into a series of Rolling Stones classics starting with 'She's a Rainbow' before an ensemble rendition of 'Ruby Tuesday,' which features the line; "still I'm gonna miss you."

Fans of the show will distinctively remember Wiig and her time on the show for her portrayal of an almost limitless range of characters on SNL. Such character have included the neurotic attention-seeker Penelope, Kat, half of the musical duo Garth and Kat (alongside Fred Armisen); and such real-life notables as Bjork, Kathie Lee Gifford and former Speaker of the House NANCY PELOSI.