Kristen Wiig and her 'Bridesmaids' co-star Annie Mumolo have signed a deal for a new comedy with TriStar. 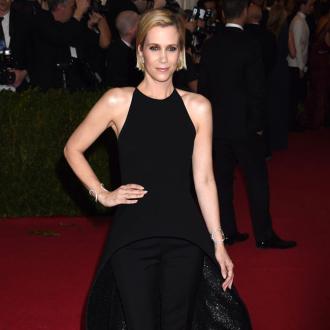 The actress has joined forces with her 'Bridesmaids' co-star and co-writer Annie Mumolo, signing a TriStar deal for an original comedy which will see Wiig step behind the camera for the first time.

Little is known about the film's plot, expect that the duo will play best pals who ''find themselves in over their heads and out of their depths, which were, perhaps, not too deep to begin with.''

The friends joked in a statement published on The New York Times: ''We're very excited to be writing. We will be going into a cave for months to finish. An actual cave. We found one that's nice and big. We're putting a couch in there.''

Wiig added: ''I've been wanting to direct for some time now. This seems like the perfect first project.''

The actresses were nominated for a best original screenplay Oscar for their laugh-out-loud 'Bridesmaids' comedy, which became one of the most popular movies of 2011 and launched 'Saturday Night Live' star Wiig to international fame.

Wiig was last seen opposite Ben Stiller in 'The Secret Life Of Walter Mitty' and is next due to grace the silver screen in 'The Skeleton Twins', 'Welcome To Me' and 'Nasty Baby'.

Meanwhile, Mumolo featured in a TV adaptation of 'About a Boy' and has written the script for David O. Russell's 'Joy'.