Rupert Sanders is ''utterly distraught'' about cheating on his wife with his 'Snow White And The Huntsman' star Kristen Stewart. 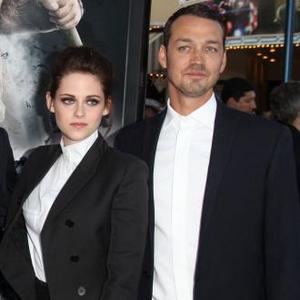 Rupert Sanders is ''utterly distraught'' about cheating on his wife with Kristen Stewart.

The 'Snow White And The Huntsman' director and his leading lady were photographed in a series of intimate embraces in Los Angeles last week and Rupert, who has two children with wife Liberty Ross, has released a statement admitting his guilt.

He said: ''I am utterly distraught about the pain I have caused my family. My beautiful wife and heavenly children are all I have in this world. I love them with all my heart. I am praying that we can get through this together.''

41-year-old Rupert's statement comes not long after Kristen, 22, also admitted her guilt and reached out publicly to her boyfriend Robert Pattinson, saying how much she loves him.

She said: ''I'm deeply sorry for the hurt and embarrassment I've caused to those close to me and everyone this has affected. This momentary indiscretion has jeopardized the most important thing in my life, the person I love and respect the most, Rob. I love him, I love him, I'm so sorry.''

Sources close to the actress insisted she wasn't having an affair with Rupert and it was a fleeting mistake.

An insider said: ''Kristen is absolutely devastated. It was a mistake and a complete lapse in judgment.''