Kristen Stewart was ''very moved'' when she had her first fittings for the wedding gown she wore as Bella Swan in 'Twilight Saga: Breaking Dawn Part 1'. 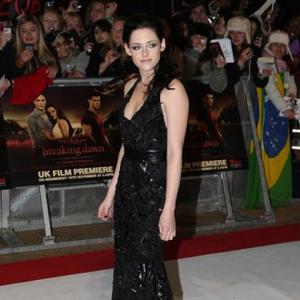 The actress was just like a "happy bride" when she had her fittings for the gown her character Bella Swan wore to marry vampire Edward Cullen, who is played by her real-life boyfriend Robert Pattinson, designer Carolina Herrera has revealed.

Carolina - who spent six months designing the gown - said: "We did three fittings. When she initially put on the dress and looked over her shoulder into the mirror, she was very moved. In that moment she was not an actress or a character in a film but instead a bride, and a happy one at that."

The designer says the dress - which retails at $35,000 - is a product of her own vision and the description in Stephenie Mayer's original book and believes the gown to be "very romantic".

She added to People magazine: "It is a union between Stephenie description in the book and the Herrera bridal aesthetic.

"I took into consideration the character of Bella and Kristen's portrayal of her, and what this fantasy character would choose to wear for the most important day of her life.

"It's made of a crepe satin with two inserts on The Front and beautiful silk thread topstitching. The neckline is a slight V, just enough to see the collarbones. The back is oval-shaped, with a Chantilly lace border veiled in tulle. It's very romantic, and when all the details come together, it creates a vision specific to Bella's style and personality."