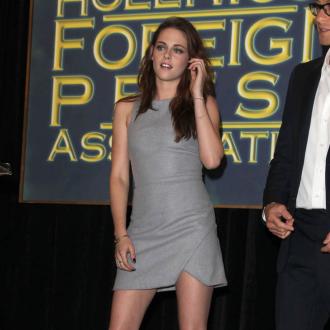 Kristen Stewart claims she is just as romantic as her 'Twilight Saga' character Bella Swan.

The 22-year-old 'Breaking Dawn: Part 2' actress - who recently rekindled her four year romance with British co-star Robert Pattinson after her ''momentary indiscretion'' with director Rupert Sanders - has revealed she shares a lot of similar qualities with her character and also has a huge amount of faith in her and Robert's relationship.

Kristen told Marie Claire Mexico: ''Bella has faith and hope. She knows what she wants and trusts people. She's loyal.''

When asked if she feels as romantic as Bella, Kristen responded, ''Yes.''

On Thursday (01.11.12) the actress opened up at a Los Angeles press conference about some of the special memorabilia she kept from the set of the vampire franchise including her character's wedding ring and said it means a lot to her.

''I kept the rings. The rings are really important to me. [Bella's] mother gives her a moon ring in the beginning and [it] completely reminds me of [the first film's director] Catherine Hardwicke every time I look at it.''

''Those are really, really extremely important to me. I love those rings.''

Kristen said she can't imagine having anyone except her 26-year-old boyfriend playing her love interest in the movies.

She said: ''I guess at this point, I can't really imagine it. It's so obvious; it slaps you in the face anytime you meet somebody who you're like, 'We definitely need to work together!' We clearly are into this, maybe not for the same reasons, because he's a nut, but I knew instantly. With Taylor [Lautner] too. I take full and complete credit for those boys.''