Kristen Stewart says she was in Katy Perry's entourage. 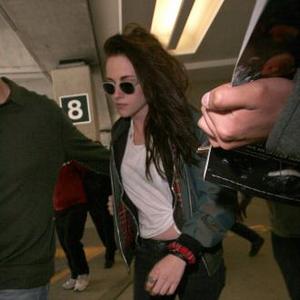 Kristen Stewart says she's like the entourage when she's is with Katy Perry.

The 'Twilight Saga' star admitted that she was too shy to get the VIP treatment when she was with the singer at recent music festival in California.

The 22-year-old actress told Jimmy Kimmel on his 'Jimmy Kimmel Live' show on Monday: ''I have a buddy who has absolutely no qualms being in front of millions of people,'' she started to explain. ''I'm not dropping - I feel like a weirdo right now - I was with Katy Perry.

'I walked behind her through...she wanted to sit up front. She's like, 'Hey, you want to go watch the Tupac stuff? It will be awesome.' I was like, 'Yeah!' ''

Stewart - who is promoting her new movie 'Snow White and the Huntsman' - admitted that she suddenly got shy as the 27-year-old 'Last Friday Night' singer drew attention to them in the crowd of music fans.

She continued: ''And then suddenly I was like, 'What are you doing to me? Ah!' And I suddenly had to put my hat down because we were literally like Moses parting the waves of Coachella getting to The Front.''

When Kimmel asked: ''You were in Katy Perry's wake?''