Kristen Stewart may owe her global celebrity to the Twilight Saga, but she takes herself seriously as an actor. And this year she became the first American actress to win a Cesar, France's Academy Award, for her performance in Clouds of Sils Maria as Juliette Binoche's personal assistant.

The 25-year-old has been acting since she was 9. "I wanted to be an actor because I was on a movie set as a little kid," she says. "Both my parents work in film - they're crew. I love movies, and I just wanted to be involved. I got really lucky, I auditioned for a while and then started making films. I used to say that I always wanted to be the youngest director. But now I'm like, 'No, I'm going to wait until I'm properly ready to do that.'" 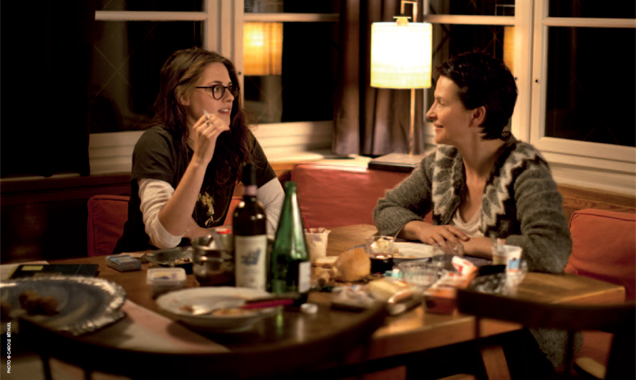 Kristen Stewart & Juliette Binoche star alongside one another

Intriguingly, Clouds of Sils Maria addresses a craziness in show business that Stewart is all too familiar with. The film contrasts serious actresses like Binoche's Maria ("she's interesting and good and strives to do cool stuff that makes people think") and the Jo-Ann character played by Chloe Grace Moretz ("put-together commercial/commodity-type actresses"). And Stewart is determined to be more like Maria, even if society clamours for the Jo-Anns. "That's what I like about this movie," Stewart says. "Why aren't we as a society mentioning the fact that it's so crazy that there are so many people that are so full of it? Any why are we consuming them en masse?"

She also enjoyed playing a personal assistant, someone who's important to every movie star. "We rarely glimpse them in movies," she says. "Perhaps that's because their role in the life of a star depends not only on the star but on the moment. They can alternately function as secretaries, gophers, therapists and 'paid friends' who are expected to always stay close to the star, but just outside of the spotlight."

Since filming Clouds of Sils Maria, Binoche has become another role model for Stewart, alongside Jodie Foster (who she starred with in Panic Room), Julianne Moore (Still Alice) and Melissa Leo (Welcome to the Rileys). And this film's themes resonate strongly with her: "Actresses go crazy when they feel like they want to hold on to what used to be," Stewart says. "I'm so satisfied and happy and absolutely looking forward to what's to come."

More: Kristen Stewart: 'Twilight' Franchise "Made Me Who I Am"