Kristen Bell peed in a jar before Oscars

Kristen Bell's was forced to relieve herself into a jar when she was unable to get out of her designer gown before this year's Oscar ceremony. 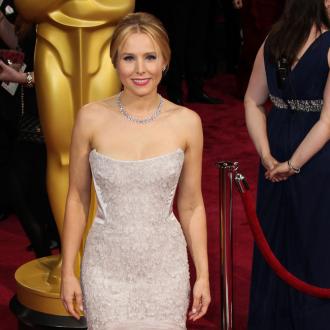 Kristen Bell peed in a jar before this year's Academy Awards.

The 33-year-old actress was forced to relieve herself in an unconventional manner before making her way to the 2014 Oscars ceremony in Hollywood earlier this month because her stunning Roberto Cavalli gown made visiting the bathroom difficult.

Speaking of the uncomfortable corseted designer dress to co-host Michael Strahan on 'Live With Kelly and Michael' last night (09.03.14), she said: ''Nope, [it wasn't comfortable] and I didn't realise that until I got into it.

''There was a situation ... there was a Mason jar involved.''

As the audience laughed she added: ''Like you guys haven't peed into a Mason jar before in a huge ball gown!''

The 'Frozen' star - who made her debut appearance at this year's awards - also made the mistake of not eating enough before the big night because she didn't realise how long the evening would be.

She said: ''This was my first time going ... You have a hair and a make-up person, [so] by the time you get into the dress you realise that you've been sitting there for like three hours. And then there's always traffic, so that's almost four hours. Then you get there and that's why everyone in the audience looks emaciated, because everyone's hungry!''

Luckily for this year's attendees, host Ellen Degeneres ordered a round of pizzas during the show to feed the ravenous audience.