Kris Jenner and Melanie Griffith had an ''amazing'' day meeting with the Dalai Lama yesterday (05.07.15). 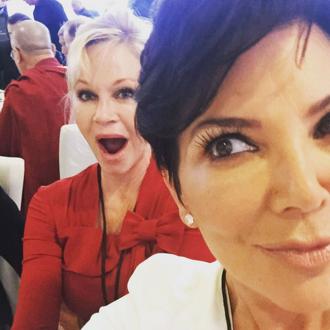 The 'Keeping Up With the Kardashians' star and her friend Melanie Griffith were among the guests at the Buddhist leader's 80th birthday celebrations in California yesterday (05.07.15) and felt ''blessed'' to be there.

Alongside a photo of herself and Melanie, 57, she wrote on Instagram: ''An amazing morning with @melanie_griffith57 meeting His Holiness The Dalai Lama... #BFF's #takethisoffmybucketlist #blessed.(sic)''

And next to a picture of the Dalai Lama himself, she wrote: ''His Holiness The Dalai Lama...What an incredible honor to have sat with him this morning... #blessed #gratefulheart (sic)''

Despite her family's famous love of selfies, Kris, 59, declined to ask the spiritual leader to pose for a picture with her, and instead took a sneaky photograph when his back was turned.

She captioned the picture: ''I think @melanie_griffith57 is a little excited to meet His Holiness The Dalai Lama... #turnaroundlookbehindyou #greatmorning #MelanieGriffith (sic)''

Kris' meeting came a few weeks after it was reported Florence + the Machine singer Florence Welch was hoping to meet the monk when he gave a talk at the Glastonbury festival.

A source said at the time: ''A lot of the artists are excited to hear what the Dalai Lama has to say. Florence is very spiritual, caring and open-minded. She would love to meet him on site.''

And Nicole Scherzinger recently admitted her poor timekeeping meant she missed a meeting with the Dalai Lama.

She confessed: ''I'm always late. I miss the most important things.

''Just recently in LA I was due to meet with the Dalai Lama - we were going to sit down and have a one-to-one - I'd even found out that he gives you a special scarf when you meet. But I missed him.''