On the map, the town of Radstock may be close to Glastonbury, but close to Glastonbury it ain't. What manifold joys, therefore, to catch Orcadian folk titan, Kris Drever at the town's small but perfectly-formed arts hub, The Victoria Hall, and on a Friday night too. Similar can be said of Canadian singer/songwriter, Kaia Kater, supporting mostly with material from her own 2016 album, "Nine Pin", with brooding, bleeding-heart banjo and a vocal evocative of Rhiannon Giddens. With the obsessive "Saint Elizabeth", where a sinner falls in love with a saint, she very much saved the best (and creepiest) til last. 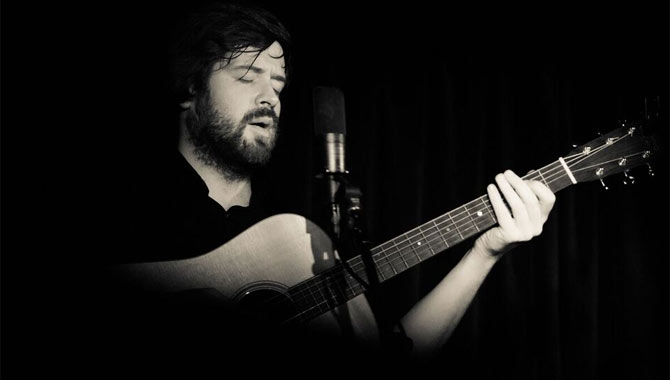 Following on where Kaia Kater left off thematically and ecumenically, Kris Drever emerged, dressed in fully-buttoned-up black shirt, black jeans and black trainers, merely a dog collar and a rendition of "My Lovely Horse" short of a casting in Father Ted. Subsequent to his biggest solo album to date, 2016's "If Wishes Were Horses", he has recently toured with Ian Carr and with Boo Hewerdine, but he has also performed solo much more often than before. Most of us know him as the engine room of Lau (what would happen if Marvel did nu-folk superheroes) or as the Celtically-connected collaborator-in-chief, adorning refrains by Eddi Reader or Julie Fowlis, so to have to ourselves his virtuoso guitar picking, his moreish-single-malt baritone, his songwriting craft and his borderline-parched, dry humour made this Friday night headliner worthy of Worthy Farm any day of the week.

Opening with "Beads and Feathers" from "Black Water", there was no easing us in, with fast fingers and percussive feet foremost. After proudly declaring 'All songs tonight will be about Brexit and Trump', he then proceeded to pull out something more broken and elegantly disconsolate in Lau's "Winter Moon" ('If the moon had a hangover.'). It soon became clear to all that the production and reception of Drever's music is a full-body, all-consuming experience. Our movements were irresistible but sedentary and seat-bound - tapping toes and nodding heads, but Drever's freer movements and vivid expressions made for intense viewing. Slower tracks brought a curled-lip Elvis snarl or the ruminative, closed-eyes, nostrils-flared look of an intense master sommelier. Quicker tracks brought frugging shoulders and funky-chicken neck thrusts. He couldn't keep still and neither could we.

As is the spirit of folk, Drever gave his reverent adaptations of others' songs. Ed Miller and Lewis Spence's "Capernaum" was 'A wee bit dialecty' and suitably dark - not one the Edinburgh tourist board will be after in a hurry. June and Phil Colclough's elegant "The Call and the Answer" had all the surging waves of heady joy the original lyrics possess. Boo Hewerdine's "Harvest Gypsies" brought the 'Go West' spirit of John Steinbeck to the West Country. Drever's delivery of 'So come away with me, or leave me,/ Come nearer to me or go away' on Lal Waterson's "Midnight Feast", compelled us early on in the set towards the more solicitous of those imperatives. One other song that sounded like a folk standard was actually a new, hitherto un-named song about Rear-Admiral von Reuter scuttling the German fleet in Scapa Flow in 1919, to be broadcast in a forthcoming Radio 4 documentary.

His self-penned 2016 tracks seemed to capture an additional essence of Drever's persona, as if he has unequivocally stepped out from behind the songs and into the spotlight, pleasantly exposed, slightly confessional and completely centre stage. Heart-warming "When We Roll in the Morning" brought a wistful purr from at least one woman in the row behind me at the line 'She breathes into me, she scatters my thinking'. "When the Shouting is Over" (not about Trump) heralded the finest whistling since Otis Redding's bayside procrastinations, before urging us to 'Build a wall and make it high' (nope - still not about Donald, especially not when it invites the listener to 'Come on home'). Folk-Award-nominated track, "If Wishes Were Horses" gave us the futility of wishing things were different without doing anything to change the situation. He finished the set with break-up song "I Didn't Try Hard Enough" - propulsive and infectious, with a glint in his eye for the wonderfully wry, shrugging refrain of 'Oh well.' His encore was the Irish classic "Navigator", giving rise to a low-level folk karaoke (folkaoke?), with at least a third of the audience instinctively singing along in sotto voce.

Kris Drever on a Friday night is the perfect antidote to the working week. 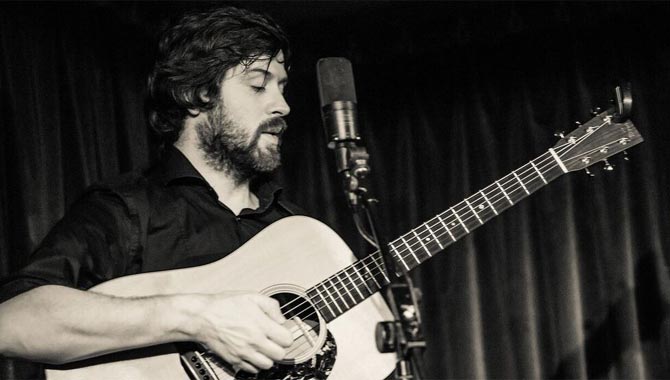