"I'm a bad girl, and you like that", purrs Kreayshawn during BFF (Bestfriend) to an unspecified hottie: she isn't kidding. After a youth spent shipping between expulsions from various Oakland, California schools,  Natassia Gail Zolot somehow wangled a scholarship to Berkeley Digital Film Institute, then drifted into making low budget videos for local rappers like Chainz and Lil' B whilst pursuing other less legitimate, supply and demand based sidelines. 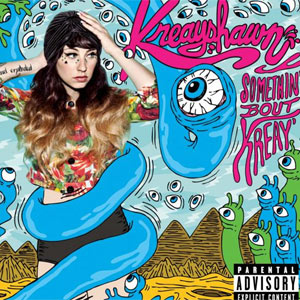 A prison cell may well have been her destination otherwise, but her d'but video single Gucci Gucci changed all that. Making MTV's top 25 tracks of 2011, it showcased a brand of hip hop that mixed high kitsch with smoke filled high times, the rapper trading in all the swag she was being given in return for keeping her leopard skin and costume jewellery. Helped by blood curdling dubstep low end and a chorus which went straight for the brain stem, it earned the former hustler a big bucks contract with Columbia.

Somethin' Bout Kreay is the result, a record so in your face you'll need a nose shield. Sporting a Euro trash aesthetic and simple pretext (Getting high, getting paid, getting some - not necessarily always in that order) both it and Kreayshawn are at their best when delivering her mantra via a hands on hips, dissing and kitty b***h attitude. Opener Blas' Blas' struts, two fingers to haters in da club over ice and kick drums, the MC sounding like sugar munching 21st century Toni Basil, whilst on Go Hard she provides more wannabe career advice whilst sneaking another sucker-worm into your earhole.

Inevitably, an artist who's made up of 90% Vitamin B***h will find that when they step out of the envelope there's a credibility gap, meaning the listener spends most of the time on the sappy Bestfriend and more grown up sounding closer Luv Haus waiting for a kiss off that never comes. There is, though, an admirable sub text; Zolot/Kreay is not only a woman in the man's world of West Coast rap, she's also allegedly gay; a source of prejudice you sense she may well be intending to turn to her advantage. At its best - the anthemic Gucci Gucci and K234YSONIXZ, a more legit dancefloor track which cheekily rips off Salt N' Pepa's Push It - Sometin' Bout' Kreay rewires some of the genre's ageing paradigms and sends it hurtling towards a 2020 moment. There aren't enough of those winners here to make a claim that the journey is anywhere near over, but pink rap in the mainstream may yet be the solution to some of the genre's more unpalatable character traits, although Kanye & Puff having a snog we reckon is off the table for now. 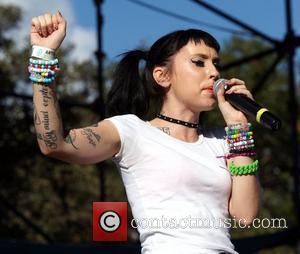