Kraftwerk kicked off the first night of their Tate Modern residency in London last night, playing material off their debut 1974 seminal album Autobahn, as well bringing out some other material to thrill the 800 sell-out capacity in the art gallery’s Turbine Hall.

Speaking to Reuters, Catherine Wood, curator of contemporary art and performance at the Tate Modern, commented on the German electronic trailblazers decision to perform at her venue. "They have a history of engaging with visual art, with minimal form, and perform in a way that is completely at odds with the usual idea of the rock star by putting the robot in the foreground," she said. "It takes away the aura of the artist and they have played with that in a very knowing way."

The group only have one original member left in the group – Ralf Hutter – and no information was given about the other musicians who joined him on stage last night, but it seemed to matter not as they wowed the crowd with cuts from the classic breakthrough electronic LP. They have seven more nights coming up ,for each of their seven other albums. Tickets were put on sale for the events last year, and even at £60 a pop the demand for them was such that the Tate’s website crashed. After last night’s show it’s easy to see why, and the group have set themselves a high standard for the ensuing concerts. 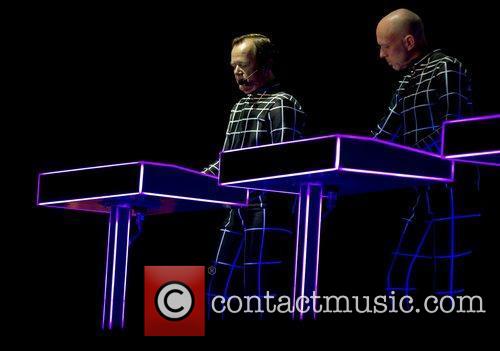 Kraftwerk To Release Trailblazing Collection '3-D The Catalogue' This Summer

Kraftwerk To Be Examined At University Conference

Kraftwerk At The Tate Modern Fry The Critic's Hard Drives

Kraftwerk at the Tate: One Original Member Left, So Is It Just a Tribute Band? Does It Matter?