Virtually unpronounceable art-pop three piece Kotki Dwa have today released the title track for their upcoming album 'Staycations' as a digital single (25th June 2012). The album is set for release on July 2nd.

The music video for the track is filmed as part of their partnership with The National Trust with whom they worked with in order to record in a variety of their staycation locations as well as produce album artwork and videos. The album features a selection of various musical instruments even including a National Trust piano and Eighteenth Century harpsichord. The trio; Alex Ostrowski (vocals/guitar), Tristan Ostrowski (bass/synth) and Tom Walker (drums); liked the idea of the themes raised in the idea of staycations and were disinclined to record in an inspiration-lacking studio.

This self-produced, innovative eleven track album was positively reviewed by various publications, as was their exceptional previous single 'Poison'. Their homemade debut album 'Onlyyouarenotsleeping' achieved similarly enthusiastic reviews and high ratings as well as having Huw Stephens from Radio 1 naming them his 'Band of 2008'. The band will launch their artistic album at a London exhibition as well as host a live show a London property organised by the National Trust in July. 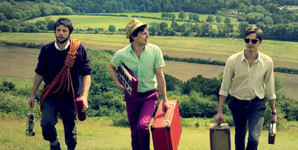 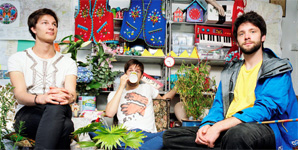