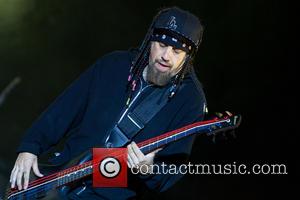 Korn star Brian 'head' Welch is celebrating his return to the stage after undergoing emergency surgery in Russia.

The guitarist, who quit the group in 2005 and rejoined full-time in 2013, was hospitalised during the band's tour and underwent an operation to remove kidney stones before flying back to his native U.S. last week (ends01Jun14) for further treatment.

Welch has made a good recovery and he returned to the stage with Korn at the Rockfest festival in Kansas City, Missouri on Saturday night (31May14).

He writes in a post on his Facebook.com page, "Right back at it again as Adtr (rock group A Day to Remember) says. First show back w/ (with) KoRn tonite (sic) and it was crazy. 50,000 people? Wow, thx (thanks) Rockfest..."