Review of Live and Rare Album by Korn 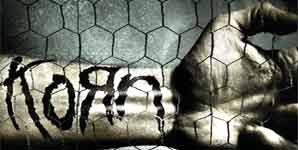 You can be sure that a title of "Live and Rare" will almost always imply that this is a release for the devoted fans only, although in the case of this offering from Korn you might be wrong. Part live album from seminal New York punk club CBGBs, part a varied selection of live covers and explicit album versions of songs, this album is actually a very good listen for even the casual Korn fan.

The live tracks span a good amount of the band's career, and include classics such as "Freak on a Leash" and "A.D.I.D.A.S"

The real gems of this album though are the covers of Pink Floyd's "Another Brick in the Wall" and Metallica's "One" recorded at the MTV ICON show. Yes, they do actually manage a decent execution of ABITW, and to be honest the Metallica cover is worth the price of the album alone.

If you are a die-hard Korn devotee, you've probably bought this album already. If you've ever given them more than a casual listen, this is actually an excellent reminder of Korn's talents. Try and play 'where are they now?" with any of the other bands lumped into the whole Nu-Metal wave. Who else but Korn springs to mind?