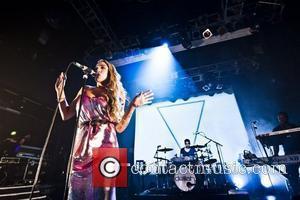 British rapper Itch has pulled out of a London gig on Friday (07Jun13) to undergo surgery on his foot after sustaining a nasty injury during a performance over the weekend (01-02Jun13).

The Bruises hitmaker broke three bones in his heel by jumping from a balcony during his overly-enthusiastic performance at The Jazz Cafe in the U.K. capital as part of the Camden Rocks Festival.

iTch, real name Jonathan Fox, was due to appear alongside American star Action Bronson at the nearby KOKO nightclub on Friday (07Jun13), but will instead be undergoing surgery to repair his damaged foot.

The rapper took to his Facebook.com page on Monday (03Jun13) to post a snap of him hanging from the balcony before the jump, alongside a photo of his bandaged foot, with the caption, "Camden rocks! Hospital sucks."

He adds, "I'm gutted to be missing this gig! If I wasn't knocked out with anesthetic (sic) I'd be fighting through doctors to get there in a wheelchair shouting 'Put your crutches up'".