Quote: "It’s a great show, it was a fun show. I’ve got quite a few quid to buy the rights so we'll see what happens." David Hasselhoff is hoping to buy the rights to his former TV show Knight Rider so he can revamp the series for the big screen.

Quote: "I suppose you are wondering why we called him KITT? Well - I can tell you now it wasnt after the car in Knight Rider!" Sophie Ellis-Bextor on the unusual name she picked for her two-month old son.

Quote: "I called my dad and I said, 'This script is like the American James Bond; it's got a sense of humour and it's, like, glowing in my hand,' and he said, 'What is it about?' and I said, 'A talking car.' He said, 'You need help!'" David Hasselhoff's father was unsure about his son taking a role in Knight Rider. 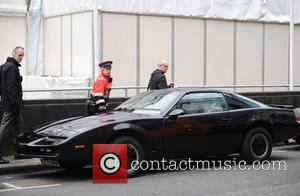