The TV series has often been compared to the returning 'Twin Peaks'.

Many wondered exactly what a show based on the characters from Archie comic books would look like; then CW series 'Riverdale' came along. Created by Roberto Aguirre-Sacasa and starring such talents as K.J. Apa, Lili Reinhart, Camila Mendes and Cole Sprouse, the series has become a huge hit with those watching at home throughout its first season. 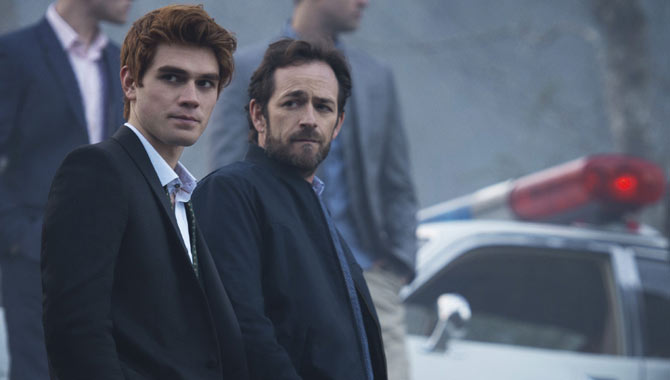 The show wasted no time in taking dark and twisted turns, telling the story of a murder mystery throughout that first season to-date when Jason Blossom (Trevor Stines) washed up with a bullet hole in his forehead. Exactly who shot the gun and ended Jason's life however is still yet to be determined, but viewers are expecting to find out who's responsible by the time the season 1 finale has come to a close.

Throughout the episodes we've seen so far, 'Riverdale' has often drawn comparisons to 'Twin Peaks' - the American serial drama that ran from 1990 through to 1991. Later this year, 'Twin Peaks' will be making its long awaited return, and now 'Riverdale' showrunner Aguirre-Sacasa has addressed the two series comparisons.

Speaking about those comparisons with Collider, Aguirre-Sacasa said: "'Riverdale' is very much in dialogue with shows like 'Twin Peaks' and with coming of age movies. When we finally landed on the formula, we did pitch it as a John Hughes via 'Twin Peaks' mash-up. I'm really glad we came out before the new 'Twin Peaks' came out!

K.J. Apa steps into the role of Archie Andrews

"We're not hiding and we're not ashamed of that influence. That's one of my favourite TV shows, and Sarah Schechter, another one of the executive producers, loves it. When we figured out that that was a way to separate this from other coming of age shows, we ran with it."

It's great to hear the comparisons don't hurt those involved in bringing 'Riverdale' to the small screen, as writers and creators should be able to take inspiration from other shows without facing criticism. In fact, 'Riverdale' is serving to hype up the returning 'Twin Peaks' better than any PR company could!

'Riverdale' continues Thursday nights on The CW in the US and Fridays in the UK on Netflix. 'Twin Peaks' returns in May, 2017 for a limited series run of 18 episodes.