Review of Compilation 8 Album by Kitsune 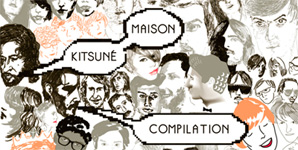 It's nice to have a dependable label around like Kistune, they do know what's what. Despite Ed Banger's recent boost in sales after the success of Justice, Kistune continues its role as the older, more successful brother of the Parisian dance labels. But Kitsune 8 shows that, if anything, there's room for them both to exist without treading on each other's toes too much. Ed Banger's harder line in underground electro/hip-hop crossovers has been lauded from the rooftops in recent times, but Kistune's 8 doesn't really encroach on that much. As always flirting with the house roots of Gildas Loaec 's 90s Daft Punk heyday, but piled high with indie and pop collaborations, Kitsune pre-empts the face of dance music to come.

Their influential reputation wouldn't exist without cause, however, and the fact is that Number 8 is a perfect harmonized balance of style and substance. Kitsune know what's en vogue but at the same time, they're not going to put out just any old rubbish because it's fashionable. This compilation is brimming with great tracks and the British contributions are sizeable. Since Bloc Party and Franz Ferdinand came along in the early 00s to marry post-punk with dance, indie sorts have been flocking back to dance floors in their droves, and there are some worthy examples on 8. My Tiger, My Timing' contribute 'I Am The Sound' a swaying, quirky pop gem. Elsewhere, much-hyped Mancunians Delphic suggest that there might actually be some warrant to the fuss with 'This Momentary,' which begins with flirty synths and twists into a pulsing, transcendental conclusion. Somewhere out there, Friendly Fires are shaking their fists. Likewise, Northern Ireland's Two Door Cinema Club represent with the angular 'I Can Talk,' neatly remixed by Moulinex. Even the forefather himself - Alex Kapranos - pops up to remix Chew Lips 'Salt Air' (could it be about suburban Bradford? A first time for everything I suppose).

There's a few interesting choices from further afield, New Jersey's Memory Tapes have the lovely 'Bicycle,' accompanied by the laid-back ambience last seen drifting around Cut Copy and Animal Collective. It's nice to see that they've actually saved some space on 8 for those not just doing a bit of dance moonlighting, although you can sigh at the advent of another band who have decided that they're 'crystal.' This time it's Spain's Crystal Fighters, who are saved from being tragic by the fact that 'I Love London' is a weirdly brilliant electro ode to Watford Junction. Amwe's Japanese annunciation is no less endearing and the opening hook of 'Friction Between the Lovers,' is an irresistible one.

I could go on but you pretty much have it there, it's business as usual on Compilation 8. Five years in and Kitsune's almighty round-the-world party shows no sign of dissipating. Thank heavens for that.