6 So what does Kit think about all the nudity on GOT?

Well he doesn't seem to mind, saying, ’it's only right, if you're going to make a show where nudity and sex is a large part of it, than you be a part of that’ However those of you who thought you saw more of Kit in season 3 are actually mistaken, as he tells us ‘the only time you saw my ass, it wasn't my ass.’ More on that later.

Sticking with the nudity theme then, cause it’s interesting. How far would Kit actually go, full frontal, perhaps? Well maybe, maybe not. When asked if he would bare all Kit said he wouldn't say he'd be happy about it. But when pressed further he answered with, 'I'm not saying. Because I don't know. It would have to be fucking well deserved.'

8. So back tothat season 3 scene

Now you must be wondering why it wasn't actually Kit whom we saw jumping naked into a rock pool. Well the answer is, the actor had broken his ankle six weeks before the season three shooting began, so a crew member had to fill in for him. So how did he manage to do that - injured in battle? Actually the much more human answer is, it happened when he was drunk. One night Kit returned home drunk and without his keys, he doesn't remember much after that but it might have involved a second floor window. Later his flatmate later found him in agony on the sidewalk. Apparently the break was so bad doctors were astonished that he hadn't also broken his leg and his hip. Ouch.

So what does one of the show's major stars think is the secret to its success, well Kit said, "I think people like it because people actually respond to not being treated like idiots. It's a really complex story, and it's very hard to follow, and people love working that puzzle out".  The story complexites aside though he also described the show as, 'a rollicking good story with sex and violence,' which is true too. 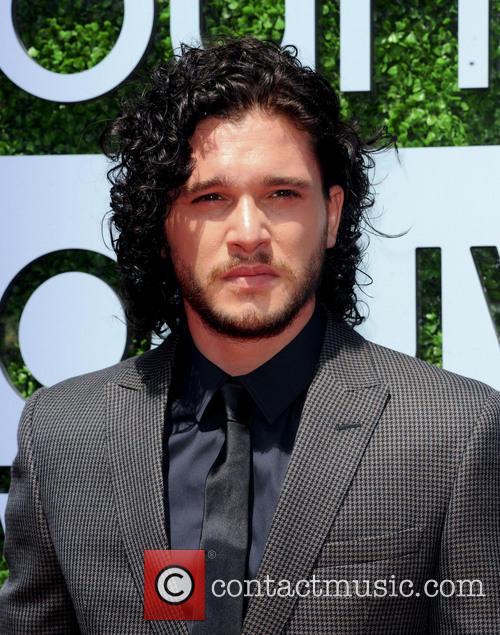 There's a babyface underneath Kit Harington's beard, we had noticed

Not really all it did reveal was tha it looks like things are going to get a lot darker and even more violent for the show's fourth season, in his words the violence is 'getting worse'. Surely that means becoming more awesome.

More: Madonna and The Celebrities Who Love 'Game of Thrones'