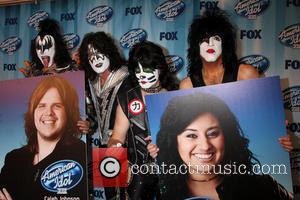 Veteran rockers Kiss marked their guitarist Tommy Thayer's birthday on stage in Las Vegas by serenading him and presenting the rocker with a cake.

The band kicked off a residency at the Hard Rock Hotel & Casino in Sin City on Wednesday (05Nov14), and Thayer turned 54 on Friday (07Nov14), so the musicians made a special effort to celebrate his big day during their show that night.

Frontman Paul Stanley stopped the concert and led the crowd in a rendition of Happy Birthday. The singer also presented Thayer with a cake, joking about throwing in his face before adding, "Hey, I'm a lover not a hater."

Stanley also hailed Thayer as an absolute "professional" and branded him a "delight" to work with.