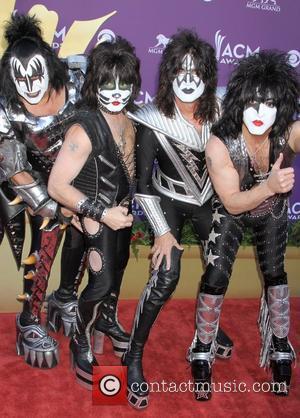 Kiss drummer Eric Singer has applauded Axl Rose for giving officials at the Rock & Roll Hall of Fame "the finger" and declining an induction as a member of GUNS N' ROSES, insisting it's about time museum bosses were given a taste of rebellion.
Rose wrote a letter to Hall of Fame bosses earlier this week (beg09Apr) announcing he would not be attending the annual gala on Saturday (14Apr12) - and that he didn't want to be part of a celebration with former bandmates like Slash and Duff MCKagan.
Many rock writers, critics and stars have blasted Rose for the snub, but Singer insists the Paradise City singer is doing the right thing.
He tells Powerline.com, "I don't know Axl that well, but he should do what he wants. I don't always agree with the choices he makes or how he goes about it... In some ways, honestly, I kind of think, 'You know something, that's pretty cool of Axl'. I think it's pretty cool that he's not only thumbing his nose at them, but that he's giving them the middle finger. I think it's cool.
"It's like, 'Who the f**k are you guys to dictate what should and what shouldn't be?'... He kind of has a voice for a lot of people who think the whole thing is kind of a joke."
Singer also hopes the snub will force officials to rethink who they invite in to the Hall of Fame after ignoring Kiss for years.
He adds, "I think the Rock And Roll Hall Of Fame... is a very cool thing, but the process by which they go about it is ridiculous. They should put a ballot out where people can call in and vote, just like they do for American Idol.
"The reason bands are popular is because people like them. The people on some judging staff, they don't - most of them - never buy music (sic)... I'm not trying to deny that some of them are genuine music fans, but who decides? All of a sudden someone says, 'I'm going to start a club and I'm going to call it the Hall Of Fame and I'm going to decide who will be in my club. And it's going to be based on my own personal bias and opinions.'"