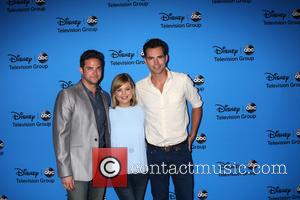 The actress, who plays Maxie Jones in the daytime drama, wed Brandon Barash, who left the show in April (13), earlier this summer (13), and now the couple is expecting its first child.

Barash tells People.com, "We're having a little girl in January. It's been the most amazing couple of months of our lives.

"We kept things quiet because of everything that can go wrong during the first trimester. Kirsten did have a rocky (time) and we were in and out of the hospital."

The actor explains that he and his new wife were told they'd struggle to become parents following her battle with endometriosis, and they considered hormone therapy to aid their chances of conceiving.

He adds, "It was pretty bleak as far as the probability of her being able to get pregnant... but then we got back from a trip to Amsterdam and discovered we were expecting... It feels like a fairytale - we are so lucky."