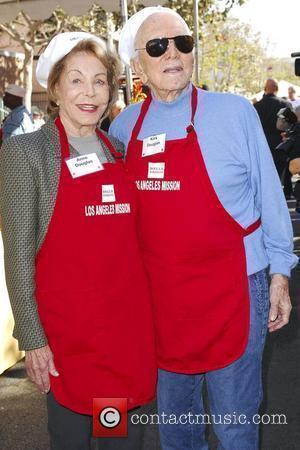 Acting legend Kirk Douglas is still bitter about his son MICHAEL's decision to cast Jack Nicholson as the lead in ONE FLEW OVER THE CUCKOO'S NEST, because he was sure the Wall Street star would hand him the role.
Kirk owned the rights to the Ken Kesey classic and harboured plans to turn it into a movie.
He decided to give his son, who at the time was a struggling actor, the chance to make his mark in Hollywood as a producer and handed the book to his son to turn into reality.
It took several years for Douglas Jr. to raise enough funds to make the movie and he and his co-producer Saul Zaentz eventually chose Nicholson to play R.P. MCMurphy, because he no longer wanted to live in his famous father's shadow.
The decision to cast the then 38-year-old Nicholson instead of 59-year-old Kirk left the veteran star annoyed - but Michael insists he has no regrets.
He tells Vanity Fair magazine, "My father has played up his disappointment with that pretty good. God bless him, he's 93. I finally said, 'Dad, I worked six years getting this together…'"
But Michael admits his father has been more than adequately compensated financially from the 1975 project.
He adds, "I have to remind him, I shared part of my producing back-end (credit) with him, so he ended up making more money off that movie than he had in any other picture."