Kirk Douglas Steals The Show At The Oscars 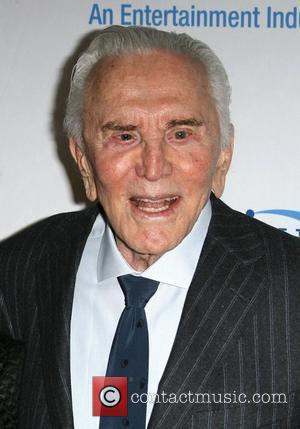 Kirk Douglas made a surprise appearance at the OSCARS last night (27th February 2011).
KIRK DOUGLAS, the veteran Hollywood actor, presented the 'Best Supporting Actress' prize at last night's Academy Awards and the 94-year-old entertained the audience with a series of hilarious quips, reports the UK's Daily Telegraph.Douglas arrived on stage to rapturous applauds and immediately began joking with co-presenters Anne Hathaway and James Franco. Turning to the 28-year-old actress, Douglas said, "Wow! Where were you when I was making movies?" 94-year-old Kirk later referenced Franco's performance in '127 Hours', saying, "You look much better out of the cave" and also pretended to fight with an attendant for possession of his walking stick. Before delivering the winner's name, the actor left the five nominees on the edge of their seats by saying, "You know, I will never forget this moment". Melissa Leo was the eventual winner of the prize for her performance in David O Russell's 'The Fighter' and speaking backstage the actress said, "He (Douglas) was doing us all this huge favour, because the longer he strung it out, the calmer I got to be".
KIRK DOUGLAS, the father of Michael Douglas, suffered a stroke in 1996 and had to learn to talk again with the aid of a speech therapist. He underwent a double knee replacement at the age of 88 and broke his foot in a fall two years ago.