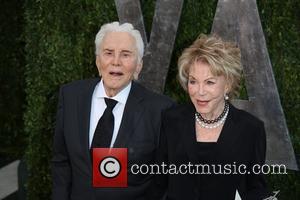 Actor Kirk Douglas has paid tribute to Lauren Bacall in an article published in the new issue of The Hollywood Reporter.

The 89-year-old movie legend died after suffering a stroke at her home in Manhattan, New York last week (ends17Aug14), and Douglas, who starred opposite her in Young Man with a Horn 60 years ago, is now recalling his long friendship with the The Big Sleep star, praising her for helping him launch his career in Hollywood.

He writes, "I met Betty (Lauren) when she was 17 and I was 24. We were both studying at the American Academy of Dramatic Arts. I was on my own in New York with meager funds.

"That winter, Betty saw me shivering in my thin overcoat. She didn't say anything, but she talked her uncle into giving me one of his two thick coats. I wore it for three years. That sort of unassuming kindness was one of her most endearing characteristics."

Following Douglas' stint in the U.S. Navy during World War Ii, the Spartacus star met up with Bacall in New York and she convinced producer Hal Wallis to see Douglas in the play The Wind Is Ninety. His performance subsequently earned him a role in The Strange Love of Martha Ivers.

Douglas and Bacall stayed in touch throughout the years, but the actor felt something was amiss when Bacall did not answer a recent letter he wrote to her.

He continues, "My latest note wasn't answered, which was unlike her. I wondered why. Then, on Aug. 12, like the rest of the world, I found out.

"It's hard to lose a friend, especially one with whom you have shared your dreams and your journey. In the case of Betty Bacall, I also lost my lucky charm - the girl who believed in me enough to talk Hal Wallis into giving me a Hollywood career. That was my first lesson in helping others without looking for thanks. I will continue to think about her whenever I put it into practice."