Kings Of The City - No Rules To The Game EP Review

With support registered from the likes of Radio 1 and Jon McClure of Reverend And The Makers, British seven-piece Kings Of The City have steadily built their reputation since their debut release in 2010. This EP is available as a free download from their site, as well as on physical format. 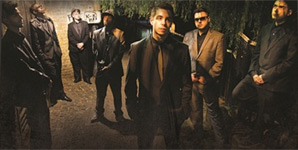 The brilliance of an EP is that you're not left hanging on a couple of tracks if you like the act and similarly, aren't left to suffer too long if the music is not doing much for you. Unfortunately Kings Of The City veer to the latter, despite a promising introduction with 'Make Me Worse'. Hooked with a great blue-grass riff, it swaggers like a 21st Century 'Sweet Home Alabama' but this only serves to heighten the disappointment with the remaining six tracks. 'Whispers' has an annoying synth throughout; 'Losing You' lacks anything to grip onto and 'Listen To The Old Man' is instantly forgettable. Featuring Salar, 'The Revelator' is an equally uninspiring closure to a mini-album that couldn't have started much better. What a shame.

Kings Of The City - No Rules To The Game