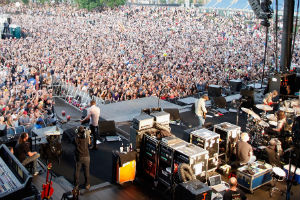 RCA Records announces the September 24 release of the new Kings Of Leon record, Mechanical Bull. Angelo Petraglia produced the album, which was recorded at the band's studio in Nashville, TN. Jimmy Fallon made a video to announce the new record.

Kings of Leon are fresh off three acclaimed headlining performances at American festivals, Bottle Rock in Napa, CA, Hangout in Gulf Shores, AL, and, most recently, this past weekend's Governor's Ball in New York City, during which the festival cancelled the band's Friday night performance due to Tropical Storm Andrea. The band, upset over the cancellation, worked through the night with festival organizers and management to figure out a way to come back on Saturday. The festival found a place for them on the main stage right before the Saturday headliner, during which the fans were treated to the live premiere of Mechanical Bull's first single, "Supersoaker."

The Kings left for England early Sunday morning. They start their European tour at London's O2 on Wednesday, June 12.